What do you eat for Christmas lunch?  When I’m cooking for two, I generally make a game dish – Partridge, Venison or Pheasant are favourites of mine.  This year I was lucky enough to win a game hamper from the Scottish game company Woodmill. We enjoyed a stunning chestnut stuffed roast pheasant for Christmas and I boiled up the carcass to make game stock. A pheasant will comfortably feed two and a good plump one may stretch to three.  In the case of the pheasant from Woodmill, there were plenty of leftovers – scraps of meat that I could pick from the carcass –  so this game soup recipe was the perfect solution. 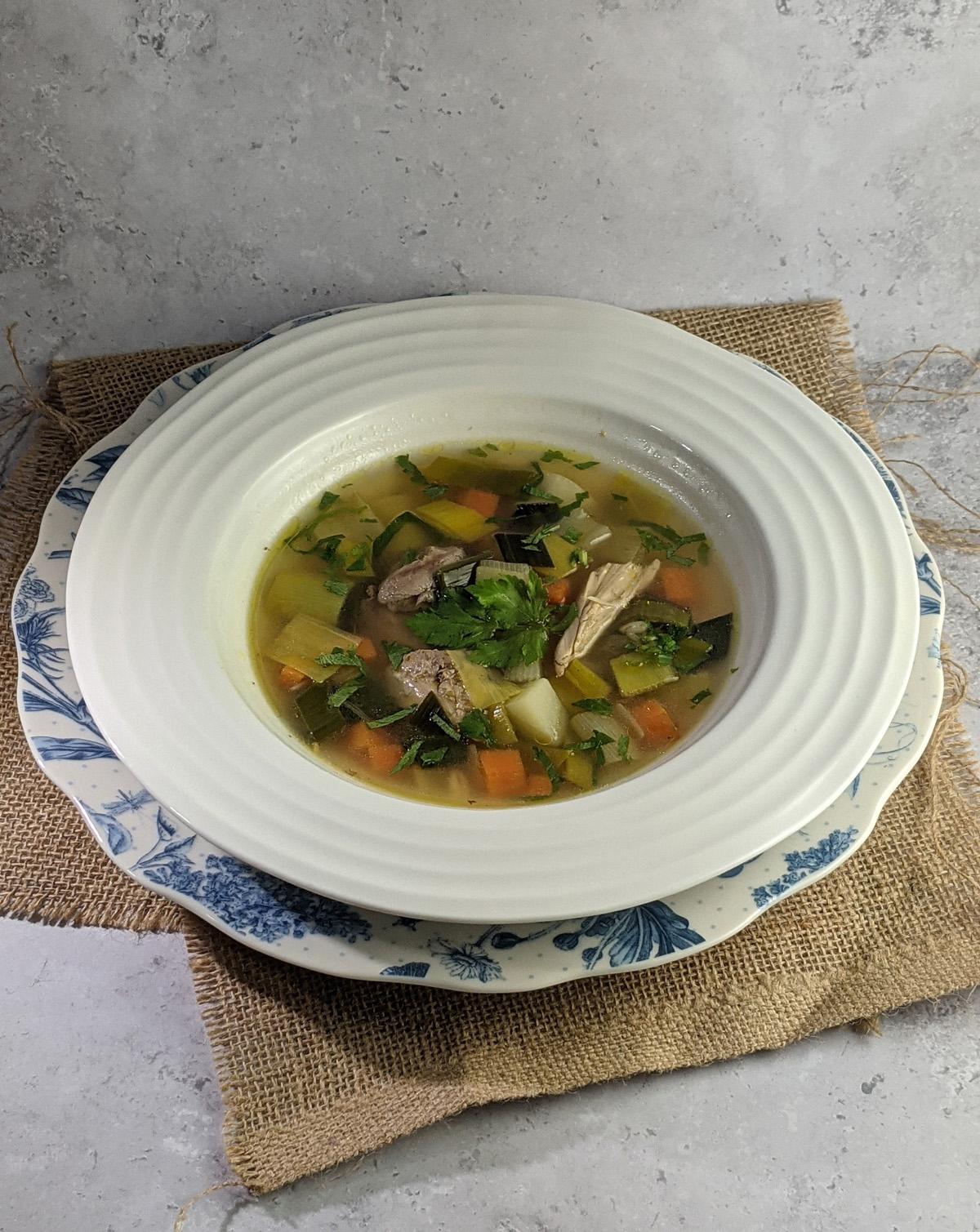 In fact, there was enough meat for me to have another meal – and to make a soup that will see me through the week.  I used half a litre of stock for the recipe, diluted with half a litre of water because I’d reduced the original stock down a lot.  The choice of vegetables for a game soup is entirely down to personal taste, but I’m half Scottish so my own game soup always includes leeks and pearl barley – a kind of gamey version of a cock a leekie.  I also added a potato, a couple of carrots and a stick of celery along with a bay leaf.  The original stock included a little white wine, carrots, celery and onion along with a bouquet garni leftover from pot-roasting the pheasant.  A lovely rich, sticky base to boil up with some water and the carcass of the pheasant for a couple of hours to make stock

Half a litre of the end result, together with the other ingredients make for a wholesome, satisfying soup.

You really don’t need more than 50-75g of shredded pheasant.  It’s a remarkably simple set of ingredients that come together to create a hearty winter dish that will make the perfect lunch.

Sweating the vegetables in a little olive oil or dripping from the meat adds depth of flavour to the soup.  Then add the stock and pearl barley and cook for around 30 minutes so that the vegetables still have a bit of bite but the pearl barley is tender.  As the meat is already cooked, I add it right at the end.  That way it warms through without becoming over-tough.

If you want to make a Royal Game Soup, a much richer and meatier affair, you’ll need venison bones for the stock and a variety of game meat.  And, a glass of port to add in!  My simple game soup is one to make with the carcasses of game birds (pheasant, partridge, quail, wild duck and grouse).  You only need a little leftover meat from the game birds – but if you don’t even have that, it works well with cubes of pancetta or even with tiny sausagemeat stuffing meatballs.

Here’s a printable recipe for you to use

For me, this game soup is a real taste of home.  I grew up in the country, my father was the village GP.  During the game season, patients would often appear with a brace of pheasant ready for plucking.  After much cursing, my mother would end up with the perfect pair of birds, ready for the pot.  And, once the pot-roast was eaten, my father would make soup.  The perfect winter lunch – which I am sure owed a lot to his own Scottish heritage.

If you like this recipe but don’t have game stock, why not try one of our other soup recipes.  This ultra frugal salad soup uses up those annoying bits of leftover salad you have in the fridge.  Or for something quite rich and delicious, try our broccoli, stilton and celery soup