Uncooked monkfish cheeks look a bit like floppy scallops without the coral. Though you could substitute langoustine or even chunks of meaty halibut or monkfish you’ll end up paying more so it’s worth planning ahead.  Mine were 8 for £5 which was more than I needed for one person (six would have been perfect). They are still cheap because until recently, this part of the fish was generally discarded.  You may still need to order them from your fishmonger, but if you can get hold of them they are a great frugal treat.

Potter Street Fishmongers, a regular stallholder at Oval Farmer’s Market, was the source of this unexpected delicacy for me. They are a perfect ingredient if you are cooking for one or two or want a fancy starter for four.  I’m trying my best to champion British fish at the moment and learnt that these came from Peterhead near Aberdeen. The largest fishing port in the UK by weight of catch, I’ve worked directly with some of the fishermen from there and am always happy to find produce that I know is sustainable and local. Monkfish fits the bill perfectly.  Like a number of British fish, it is regarded as an ‘export species’ because it is more popular in mainland Europe.  Brexit red tape makes it hard for fish to be sold to European countries at the moment and the wholesale prices have plummeted. But, monkfish cheeks are not generally expensive anyway and as I was preparing this dish it did strike me that monkfish cheeks would make a fine substitute for scallops at around a third of the price. I suspect the limited popularity is due to the fact that they are sometimes supplied covered with a fine grey membrane that needs to be removed with a sharp knife before cooking.  Mine were already prepared, so all I needed to do was heat a pan!

The basic ingredients for this dish comprise monkfish cheeks, chorizo, a good handful of young spinach from my garden, tomatoes, garlic and a handful of new potatoes.  I added thyme to the cooking and parsley as a garnish, a teaspoon of smoked paprika, a splash of vermouth and a good squeeze of lemon juice.

It’s a dish you can vary using a bit of common sense.  Switch out the herbs, use leftover white wine, change the potatoes for white beans or floury old potatoes and use pancetta instead of chorizo.  It really is up to you – or perhaps to what you have in your fridge!

Start by cooking your potatoes.  I cut mine into quarters then popped them in a pan of boiling water for about 12 minutes till they were nice and soft.  While they were cooking, I fried the chorizo till it was just starting to go crispy, then removed it from the frying pan and added in a little olive oil with the garlic and paprika to cook over a moderate heat for a couple of minutes. While that was happening, I tore the spinach into strips and removed any thick stems.  I sliced up the cooked chorizo into ribbons and picked the thyme leaves.

I added the spinach, thyme and tomatoes to the pan and cooked for a minute or so before stirring through the chorizo and vermouth.  I cooked that mixture until the vermouth had reduced almost completely, then added the potatoes and seasoned the whole mixture with salt and pepper before tipping into a casserole to keep warm.

Tossing the monkfish cheeks in seasoned flour helps give a nice crisp coating. For a change, you could make a tempura batter instead, or not add flour at all. I just pan-fried them in olive oil for 2 minutes on each side before adding them to the vegetable mixture, squeezing over some lemon juice and garnishing with chopped flat-leaf parsley. 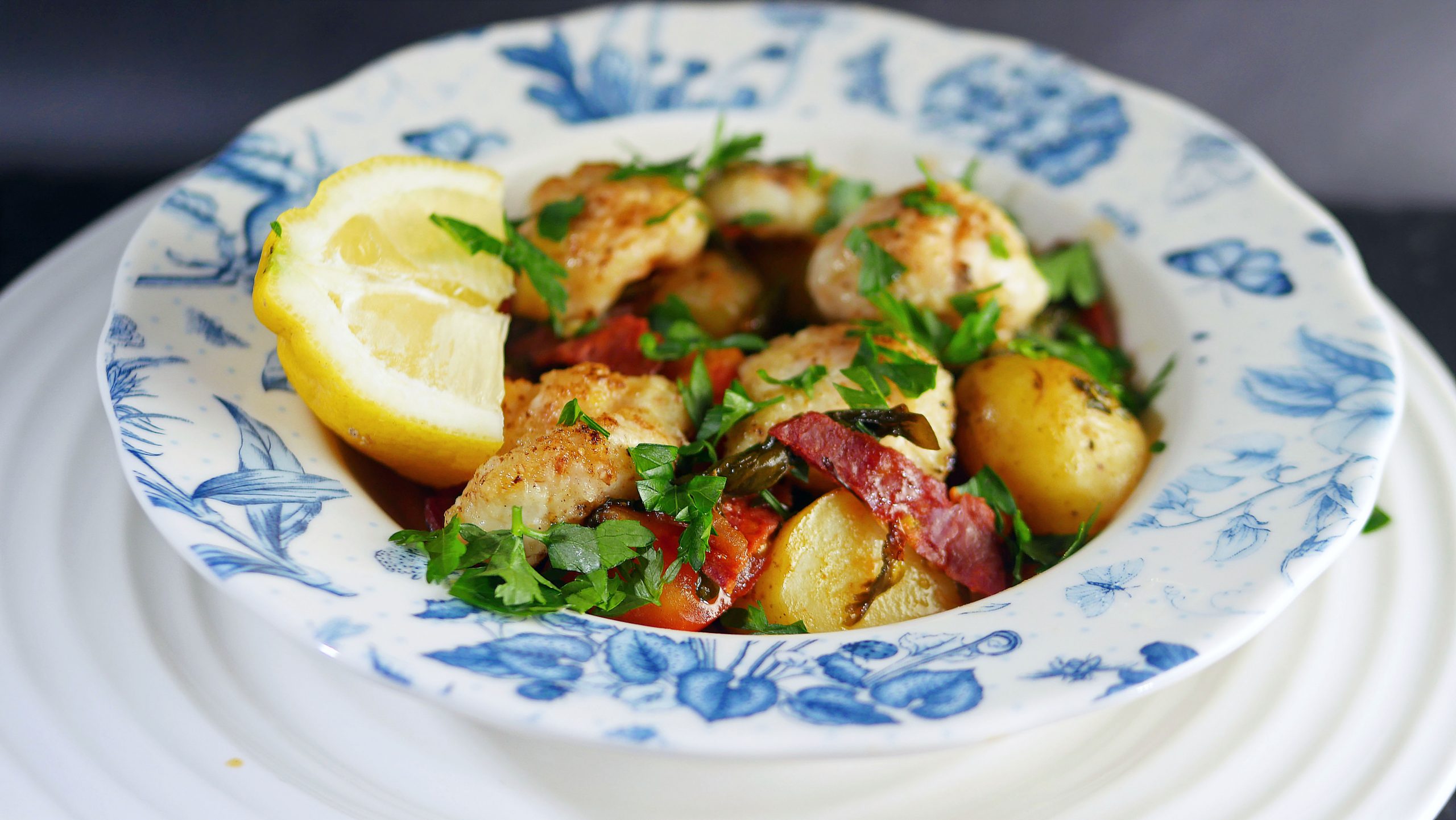 Here’s a printable version of my monkfish cheeks with tomato, chorizo and spinach.

Want to try this recipe in the future? Here’s a pin for my monkfish cheeks with tomato, chorizo and spinach. 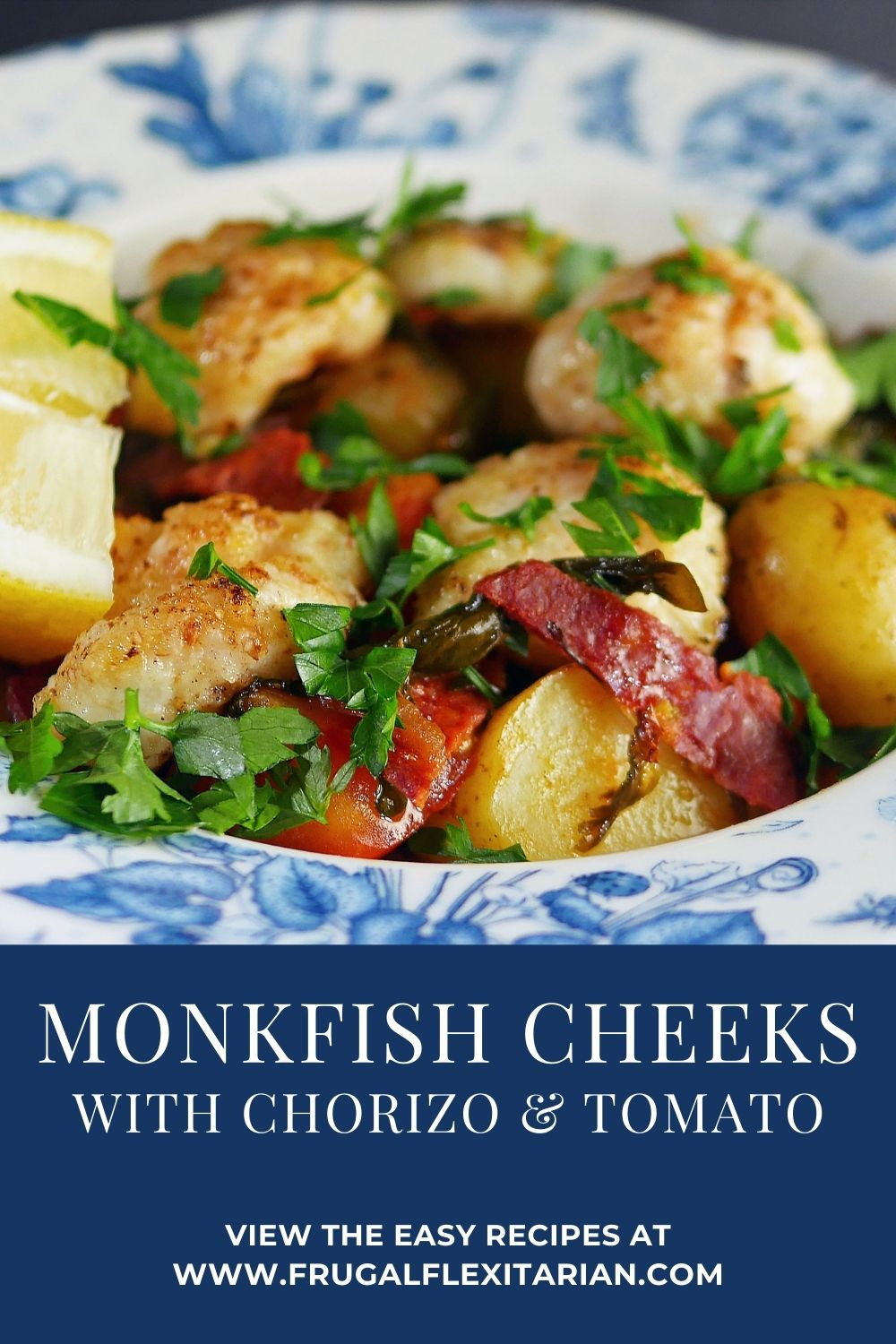 Looking for a different fish recipe? How about this one for Mussels in Cider and Cream?  It’s another quick and easy supper dish that’s perfect if you are cooking for one or two