Home » Pissaladière with Sourdough Base

Try to find a recipe for pissaladière and you may find yourself confused.  Two distinct versions have evolved, one using pastry (shortcrust or puff) and the other using a bread dough base like a pizza.  I’m in the pizza/bread dough camp, mostly because I can make a pizza base easily with sourdough discard.  But, even the French appear to be divided.  Pierre Kauffmann makes his version with puff pastry while Pascal Aussignac using a bread dough base.  Over the channel here in the Old Blighty where we only guess at what the French really mean when they are cooking, James Martin is a pastry fan and so is Nigel Slater.  But, Delia makes hers with a pizza base and my own favourite reference for French cookery, Elizabeth David writes that the pissaladière is ‘a substantial dish of bread dough spread with onions, anchovies, black olives and sometimes tomatoes’ and her recipe is for what she calls a ‘bread pastry’.  Then again, Larousse Gastronomique talks of ‘a kind of flan made mostly in the Nice region, filled with onions, anchovies and black olives’. 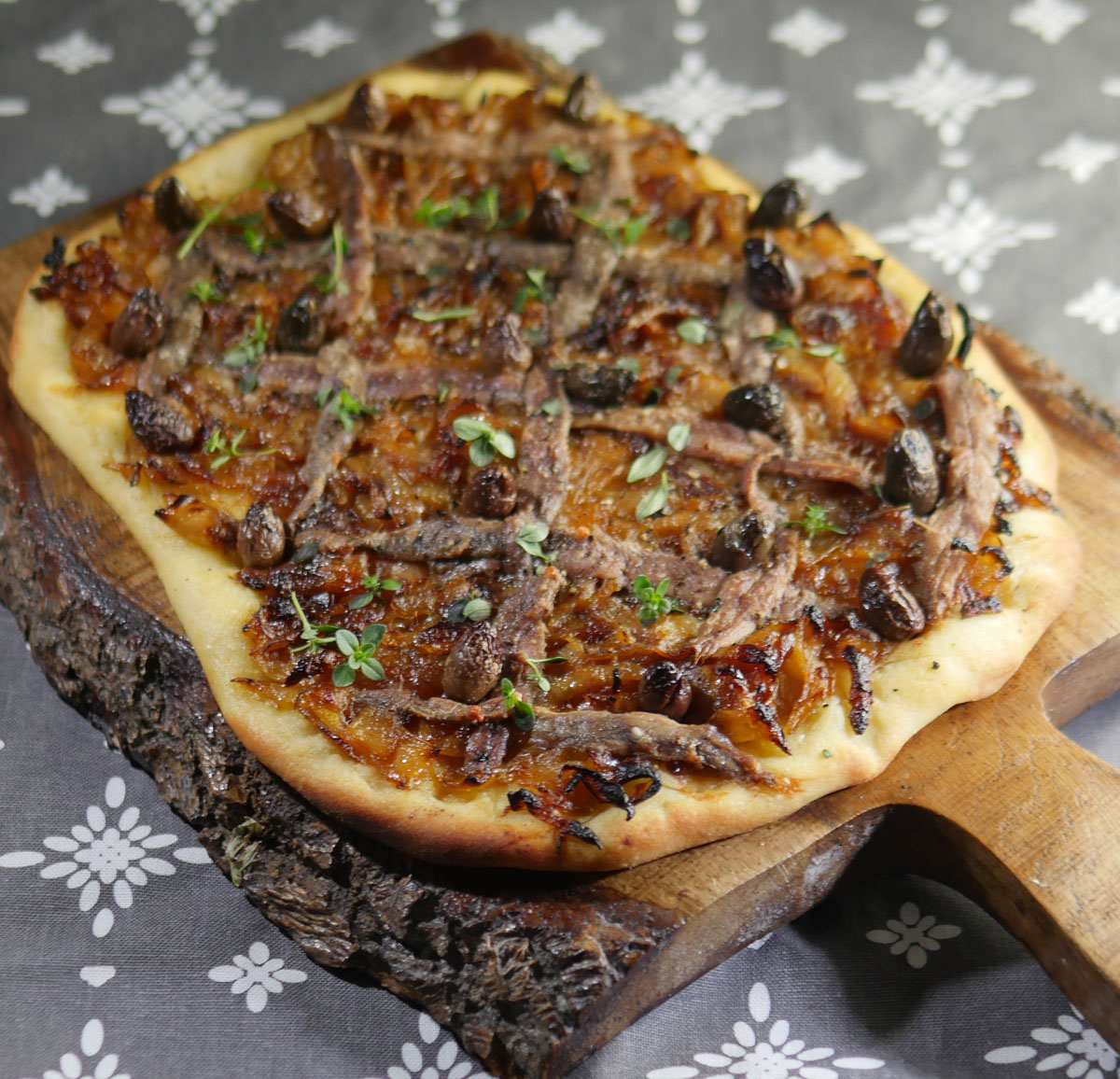 Maybe the confusion comes from the name.  In Nice, you’ll also find a condiment called pissalat, which is made by sieving ‘young fry’ of the herring family (usually anchovies and sardines) then salting them in a paste.  The name pissalat comes from peis salat in Niçard and means “salted fish”.  That mixture can be used in the preparation of pissaladière.  So, although pissaladière is often compared to pizza, that’s not necessarily the origin of this dish at all. It’s thought that the speciality came from Liguria originally and became an established part of French cuisine only after the annexation of the County of Nice to France.

So, gentle reader, I’ll leave it to you to decide whether you prefer a bread or pastry base.  If you don’t want the hassle of making dough, I’d propose using a sheet of ready-made, all-butter puff pastry.

Where you really shouldn’t compromise is in the making of the onion topping.  You will need a lot of onions and a decent amount of time. The first time I made this dish, I caramelised my onions on the hob in a cast iron pan.  It took over an hour over a very low heat and involved stirring every few minutes.  Chef Google came to my rescue and I discovered that you could make caramelised onions in the instant pot (not recommended unless you are really short of time as you end up with a jam-like consistency) or, by using a cast iron pot, in the oven.  So, after I’d sliced up my onions I tipped the lot into a cast-iron casserole, stirred through a generous glug of olive oil and put the dish in the oven at 170C.  I did stir the mixture every 15-20 minutes for the two hours it took to get a soft golden brown caramelised onion mix.  But, it was a much easier task and I ended up with a glorious batch of onions.

There’s not much else involved in making pissaladière.  Do check your anchovies by opening the jar or tin before you start to caramelise the onions.  Sometimes they are so salty that you’ll need to soak them for an hour or so in milk.  And, pick your olives carefully. I used Taggiasca olives (a small, nutty variety from Liguria – the same type you’ll find in Nice but more readily available in the UK) preserved in olive oil and herbs with the stone in.  You don’t need to add herbs or garlic unless you want to – I added a handful of fresh thyme from the garden this time but you could use oregano or fresh rosemary (or a mixture). Finally, if you are making the bread-based pissaladière, turn your oven up high to 220-230c just as if you were making pizza and cook for 8-10 minutes till the dough edges are brown and the topping is bubbling-hot.  For a pastry-based version, I’d cook at 180c (170c fan) for 15-20 minutes so that the puff pastry edges are nicely golden.

Here’s my recipe for pissaladière.  It makes plenty for 4-6 as a starter or for 2-3 as a supper dish.

Meanwhile, if you want to save this post for later why not pin it!