This is a dish for people who love potatoes.  And a game-changer if you think that you don’t.  Relative to Dauphinoise potatoes, its decadent, rich cousin, a dish of French Boulangère Potatoes can be frugal and even respectably low in calories.  But boulangère potatoes are most certainly not lacking flavour.

French boulangère potatoes are made with just two main ingredients.  No cheese or cream at all.  In ‘Simple French Cooking for English Homes’, Boulestin instructs the cook to

Cut two large onions into thin slices, cook them for a few minutes only in butter.  Cut your potatoes into thin slices, arrange them in a very flat dish with the onions, add a claret glass full of consommé, a good deal of pepper and salt, and brown in a moderate oven for about one hour and a half

Not the most helpful of instructions for the cooks of today, the ratio of potato to onion is unclear amongst other detail.  But, the kitchen of the 1920s would have had a cook used to this style of recipe and hopefully would have known how to proceed,  From the introduction to the book, I believe that Boulestin was the world’s first TV cook (his series ‘Cook’s Night Out’ was broadcast from 1937!).  Sadly there’s no footage of him making french boulangère potatoes though!  Many of his comments though still ring true.  I particularly like

A good cook is not necessarily a good woman with an even temper.  Some allowance should be made for the artistic temperament

Of course, there is a myriad of recipes for boulangère potatoes.  Delia adds milk to hers, Jamie Oliver tops his with Parmesan cheese, Gordon Ramsey uses olive oil rather than butter and James Martin uses very little butter at all in his recipe, but instead makes the boulangère as a roasting base, with lamb or chicken cooking above, so that the fat from the meat anoints the potatoes as they cook.  But, if you take this dish back to its roots, French Boulangère Potatoes originated from the days when poorer homes in France didn’t have an oven.  Instead, they would take this potato dish to the baker, the boulangèrie on their way to morning Mass, where it would be cooked in the ovens as they cooled after making the day’s bread.  By the time Mass was over, the dish would ready to collect and take home for lunch.  And, as you can see, the name in French, Pommes de Terre Boulangère,  literally means potatoes from the baker

My own version, a hybrid I’ve made since I was at university, uses chicken stock (or vegetable stock if don’t have any homemade chicken stock or I’m catering for vegetarians), butter, onions, garlic and floury potatoes.  I add in whatever herbs I have growing fresh in the garden that are likely to work with the other dishes I’m serving.  Right now, the rosemary is a bit tired so I’m using sprigs of thyme.

I’ve got a bit fussy about onions and garlic here, thanks to a visit to Borough Market.  The onion I used is a Roscoff onion from Brittany which has a unique delicate flavour and a light pink tint when sliced which disappears when it cooks.  It’s mild enough not to need the pre-cooking in butter which some recipes recommend. The garlic is another French variety, Lautrec, from the Tarn in Southern France.  It’s mild, sweet garlic that keeps well through winter.  It’s also unlikely to be authentic in any way, but it’s something I like!  And, I’ve used thyme from the garden and just a scrap of rosemary.  My intention was to use the rosemary but when I tried to pick enough for the dish it was obvious I’d have no rosemary plant left if I carried on!

There are three things which I believe are essential to the success of french boulangère potatoes.  Firstly the need to cut thin but not too thin slices of potato and onion.  Secondly, cooking the dish itself reasonably slowly – I use a fan oven set to 165 and cook for about an hour.  Finally, lots of butter and a good stock. My preference is to use homemade chicken stock.  But, the recipe works well with my vegetarian instant alternative – Marigold.  If you do use a stock cube or powder make sure you hold back on the salt until you’ve made the recipe once or twice.

I cut my onions and potatoes with a mandolin set to 3/8cm.  Once upon a time I had a food processor and might have considered using that to slice the veg. But, I used it so little that I ended up giving it away.  The mandolin, when I remember to use it properly, is the perfect solution for two potatoes and one onion – less washing up and less storage space.

Start by peeling your potatoes, onion and garlic.  Slice the potatoes and onion with the mandolin, a very sharp knife or using your food processor and cut the garlic into tiny pieces.  Set the oven to what your own ‘moderate’ heat is.  A fan oven will probably be 165-170c, while a normal oven will be around 180c.

Butter a gratin dish (anything shallow and ovenproof).

If your onions are very strong (the sort that you can’t eat raw), then melt a little butter in a frying pan and soften the onion slices for 5-8 minutes, without colouring.  Milder, sweeter onions won’t need pre-cooking.

Start layering with a few onions over the base of the gratin dish.  Add salt and pepper, a few leaves of stripped thyme and some little bits of garlic.  Now add a layer of potatoes, using up any of the scrappy bits that don’t look perfect.

Continue layering onions, garlic, herbs and potatoes, finishing with a neat layer of potatoes.  This dish shouldn’t be more than three layers of each and could be two.  Once you’ve finished layering the potatoes, press down on the layers with your hands.

Pour over the stock.  Add enough to reach to about a third of the depth of the dish – it will bubble up as the potatoes cook and gradually be absorbed.

Now dot the potatoes with lots and lots of little bits of butter.  Season with salt and pepper and add the remainder of the thyme.

Put the dish uncovered in the oven for 30 minutes.  At that point, check.  If the dish is drying out, add more stock.  If the potatoes look as if they are browning, cover the dish with foil.

Cook for a further 15 minutes, then uncover the dish and finish for 5-10 minutes.  It’s a very forgiving dish and if you leave it in the oven for an extra 15 minutes no harm will be done, so long as you add stock as necessary to keep the mixture from drying out completely.

The ingredients I used made enough for 3-4 servings.  I’d recommend a ratio of potatoes to onions of about 2:1.  And, if you want to make a vegan version, you can, of course, use vegan margarine or any good oil.

Boulangère potatoes reheat very well, so if you want to make the dish in advance, just allow 20 minutes to reheat at 170-180C. 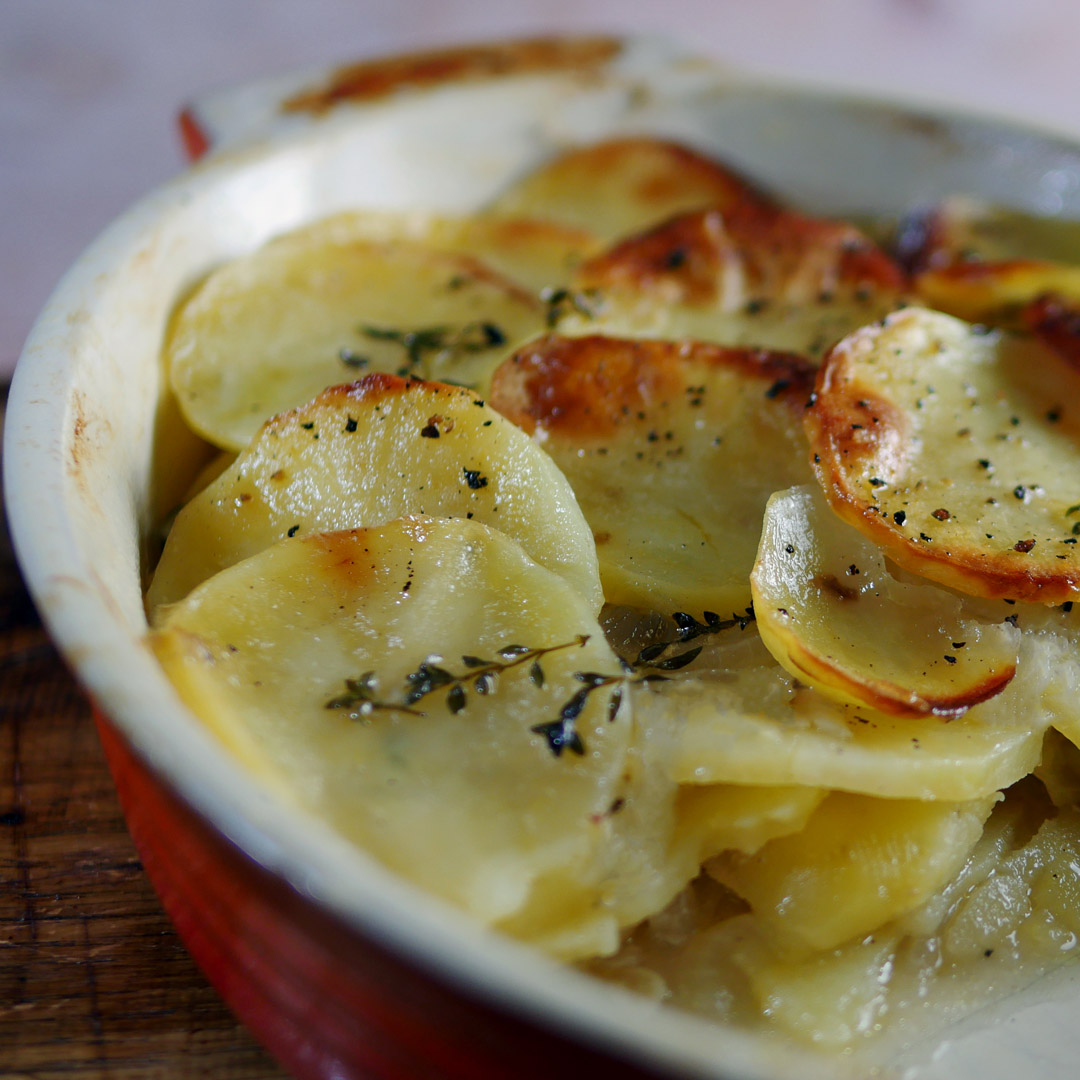 Looking for a different style of French potato dish?  try our Parmentier Potatoes – a delicious and rather posh alternative to chips!