The idea of vegetarian goulash seems almost a contradiction in terms.  As Wiki tells us, the word goulash originates from the Hungarian word gulyás.  And, as gulya means herd of cattle in Hungarian and gulyás means herdsman or cowboy, Goulash, as we know it today, is normally a soup of meat and vegetables seasoned with paprika and spiced with just a touch of caraway seed.  It’s the National Dish of Hungary but was traditionally eaten in other parts of Eastern Europe and it dates back to at least the 9th century. The meat used was originally dried in the sun then packed into bags to be reconstituted with just water and cooked on a cauldron on an open fire.  Today’s goulash is more likely to be made with fresh beef which is cooked slowly in an onion, tomato and paprika base. The stew or soup is made with other seasonal and local ingredients – carrots, parsnips, potatoes, beans and more.  So, a veggie goulash with no meat can’t pretend to be authentic.  But, it’s delicious – so who cares if this goulash isn’t the genuine thing. 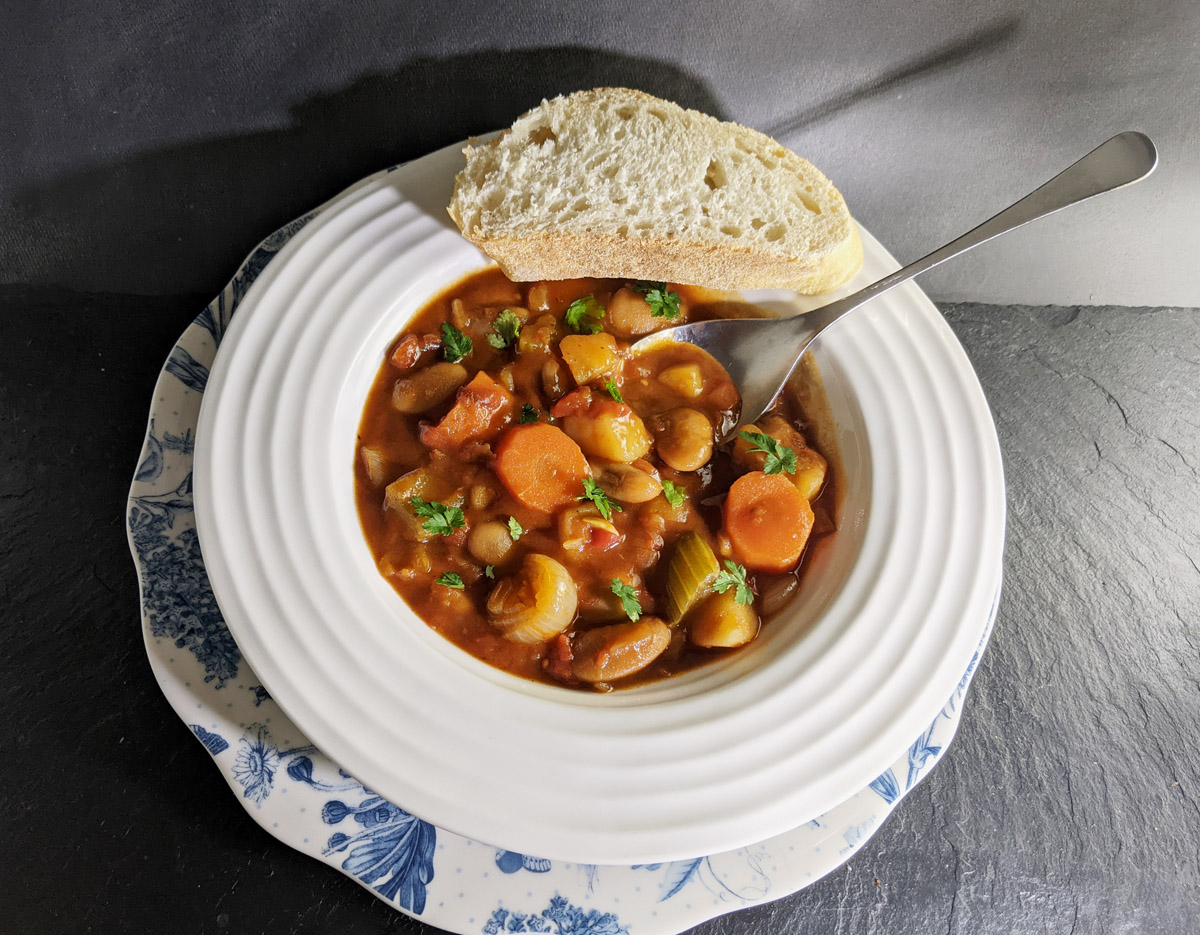 This bean and potato vegetarian goulash is a hearty dish that will work perfectly well in its own right as the main course.  Given that most of us now have desk jobs rather than working in the field, I wouldn’t add more carbohydrate in the form of noodles, but if you want to enjoy a slice of crusty bread to dip in the rich sauce, that would be no bad thing.  In true flexitarian style, if you really want to eat meat or fish it will also work as a side dish.  Try it with a couple of sausages, with grilled lamb chops or with oven-baked fish.  You don’t need to add sour cream, but if you want a softer mouthful, then you may prefer it.  You can also vary the ingredients based on what is in season and what you have in your storecupboard.

In fact, I’ve used some very unlikely beans in my vegetarian goulash.  Anyone with a sharp eye might notice that these beans look much like normal haricot beans but are about twice the size.  They are rounder than lima beans and have a creamy white skin.  I brought them back from a trip to l’Aisne – they are a regional speciality called ‘Haricot de Soissons’.  One of France’s largest dried white beans, they are grown around the town of Soissons and are protected locally by Confrérie du Haricot de Soissons, a body of men and women who ensure that no one tries to pass off a lesser bean as a Haricot de Soissons. Mine had been languishing in the larder and really needed to be used up, though I’d fully intended to use them to make a more traditional French cassoulet.  Instead, they went into this vegetarian goulash, where I’d normally use regular haricot beans or lima beans.  And, they were so good I ended up searching on google to see if I could order more.  Brexit has done us no favours and although I can find them online the shipping costs are prohibitively high (around £25!) so I won’t be indulging in more Haricot de Soissons unless I’m visiting France again.  Like all dried beans they are best soaked overnight before being boiled till soft.  Alternatively, you can use a pressure cooker or an instant pot to make things a bit faster.  They may not look quite so perfect and turn out a bit like the ones you see in the picture, with rather wrinkled skins.  But, they’ll take around half an hour – and in something like a veggie goulash they will end up slathered in a paprika and tomato sauce in any case!

This has to be one of the easiest one-pot suppers to make.

Once you’ve made up your beans and are ready to cook, the first thing to do is to make a fine dice of onion and garlic as the base for the goulash.  Chop the onions into tiny pieces, about the size of a grain of rice and chop or crush the garlic to about the same size. Then, take a heavy-based casserole dish and heat a tablespoon or so of oil so that it is warm rather than burningly hot.  Add the onions and garlic and leave them to soften, stirring frequently so that they don’t burn.

In the meantime, prepare the other vegetables you are using.  Carrots (for sweetness) and potatoes (for texture) are essential, but what else goes in the pot is up to you.  On this occasion, I’ve used shallots and celery but you could add in mushrooms, parsnips, celeriac and even peppers.  The point is to have a good mixture of flavours and textures.  Cut everything into largish chunks about 1cm square.

When the onion is nice and soft,  stir through the paprika, a pinch of cayenne pepper and half a teaspoon of crushed caraway seed.

Cook for a minute or so, stirring constantly, before adding in the remaining vegetables and stirring well.  Continue to cook for a few minutes.  Season the mixture with pepper and a little salt.  Stir through the beans.

Now add the stock – a can of tomatoes mixed with 400ml of vegetable bouillon.  There should be enough liquid to just cover the vegetables and beans.  Stir well, bring to the boil and reduce the heat to a gentle simmer.

Simmer gently on the hob for around 30 minutes till the vegetables are cooked, adding more water if necessary.  Then taste and adjust the seasoning.  The bouillon (I use marigold) can make a salty result, so it’s best to under season until the dish is cooked.  The end result should be somewhere in between a soup and a stew – just right to ladle out into bowls.  You can serve goulash with noodles if you want, but personally, I think it’s best with just a slice of bread.  I also enjoy eating this as a side dish with grilled meats, sausages (meat or vegetarian) or baked fish.  Finally, if you like a dish with a bit of fire, feel free to add more dried chilli flakes along with the paprika, cayenne pepper and caraway seeds at the start.

It’s worth noting that my very inauthentic vegetarian goulash is also based on the ‘wrong’ sort of paprika (mine is a sweet smoked Spanish paprika).  I loathe food waste and spices are a particular issue for my small household, where a small packet can linger for months and end up tasting like cardboard.  I try to limit what I buy to what I use regularly and so I don’t actually have authentic Hungarian paprika in the cupboard. If you do want to try, Hungarian paprika comes in a number of different flavour profiles and colours and of course, there’s a ‘right’ paprika for goulash.  Sweet Hungarian Paprika or édesnemes, is most commonly used and it has a pungent flavour and sweetness.  Paprika arrived in Hungary with the Turks during the 16th and 17th centuries.  It became popular as a seasoning with shepherds and herdsmen and gradually became the dominant spice in Hungary.  It’s rather hotter than Spanish paprika – and the smoked paprika I am using is definitely not a Hungarian concept.  However, since this dish would originally have been made in a cauldron over an open fire, I like to think the smoked paprika just adds back a bit of the traditional smoke from cooking.  Adding a little cayenne pepper is also not an authentic ingredient, but is good compensation for lack of heat in the ‘wrong’ paprika.  Does it matter?  Well, given that vegetarian goulash seems to me to be a contradiction in terms, probably not.  Just don’t try serving it to someone from Hungary!

Here’s a printable version of the recipe if you’d like to try it at home.